A Final Look at our Christmas Village 2010

Edited Thursday night for a final update:  We did end up with enough snow that should have given us a White Christmas, but we won't know the final outcome until after a mostly sunny day Friday with temperatures in the low to mid 30s if that "should have been" will end up being "did give."  The Thursday sunny afternoon did melt quite a lot of snow, and even though most of our yard is still sort of white, it may still be a little iffy for enough remaining Saturday to truly call it "A White Christmas."  In any case, the Gator Clan wishes you a Merry Christmas.  (This entire post will end sometime tonight.)
Edited Wednesday night for another update:  We had what I guess was light snow all day today, but the temperature melted it as it landed.  Tonight we in for relatively several hours of more snow and the forecasters say we could get from one to four inches by morning.  If that does happen, then the Old Gator Dude's hopes will again be up a bit hoping for a White Christmas.  With two sunny days before Christmas, though, it could be dicey.
Edited Tuesday night for weather update:  We did have some non-accumulating light snow on the swamp today, but the "white" in "white Chistmas" is disappearing.  The weather folk are trying to convince us we could get some more snow late tomorrow which could help.  Meanwhile the Old Gator Dude's 'hopes' for a White Christmas continue to diminish.
Edited Monday night:  Wow!  Plowable snow!  It was beautiful.  Now the big question:  Will it last at least through Saturday to give us a White Christmas?  The Old Gator Dude surely does hope so, but has his doubts.
And now, back to the final look at our Chistmas Village:
The Gator Clan's annual Christmas Village was completed right on schedule. As you know, we begin assembling our collection of Department 56 village pieces on Veteran's Day with the goal of completing the display during the Thanksgiving Weekend each year. Our collection includes structures and accessories from the Victorian Village Series and the Dickens Village Series. It was officially "Lit" for the season on Saturday, Nov. 27th.
Here is a final look at just some representative pictures of the final display (click the picture for a larger view, then use the back arrow to return here or you'll leave the site): Our, and many of our visitors', favorite scene is the Dickens Village Series which we use as a depiction of Charles Dickens' immortal A Christmas Carol, the story of Ebenezer Scrooge and Tiny Tim.  At the rear center here and on the right edge of the display is our version of the cemetery where Scrooge began his final transformation into a "nice guy."  The cemetery is not Department 56, but was created several years ago by Anne at Romard's Hallmark Store in Portland. 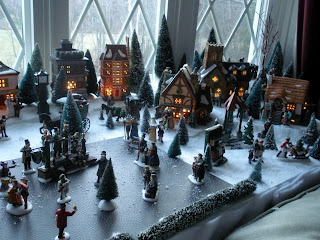 In the middle of the Dickens' scene is the Village Center.  Here Charles Dickens is depicted on a small stage reading his famous story as much celebratory activity takes place around him. 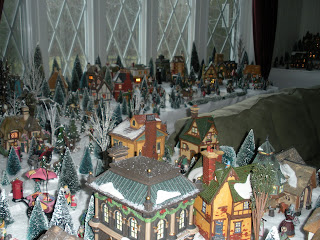 What we call the main village is in the forefront as it looks across to the Dickens' section. 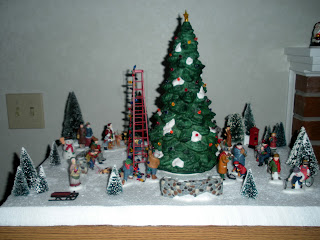 As we memorialized this year's Village, our regular Christmas Tree had not yet been placed.  But the Village display has its own Christmas Tree which we put in its own scene next to our fireplace. 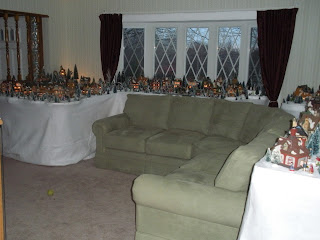 And finally, if you glance back while leaving the living room heading to the eating area, you get a nice look at the transformation of the room into Christmas Village 2010.  The room will be returned to normalcy early in January.
We do not include all our pieces each year so that we can vary the village from time to time. This concludes this year's presentation of the Gator Clan's Christmas Village 2010 and this series will disappear sometime Christmas Eve.  If you missed them, you can see the earlier blog looks by selecting the appropriate title in the Archives on the right.
All the pieces in our collection including the villages' names, except the skating pond, bonfire, cemetery and base materials, are registered trademarks or copyrighted by Department 56, a division on Enesco, LLC.
GiM
Posted by GiM at 8:30 PM