A Gator and a couple of Dogs

My goodness it was raining when we arose this morning. Channel 6 weatherman Kevin says some parts of our state could get up to three inches. About two are expected in the Greater Portland area. It's windy, too. But, and read this: Kevin says we will flirt with 80 degree temperatures over the coming weekend, perhaps just a wee bit cooler along the coast.

You just read about the weather here this senior fitness morning. You've read many times how this weather affect this old body and it was no different today. I went and punished myself and did all my exercises, but I didn't enjoy them. And that's all I'm going to say about senior fitness on this Tuesday.

I’ve been a bad boy. My Fearless Friend and his wife had reminded me that I haven’t posted any pictures of Gator Golden in quite a while and thought it might be nice if I did. It was gently pointed out to me that both GG and her sister would be here for the weekend and it would be a great opportunity to get some pictures. I told him I would. I didn’t.

Saturday was a lousy weather day. It didn’t rain, but we had clouds about all day long. Gator Daughter didn’t spend a lot of time here and the dogs spent very little time outside. I spent none. Sunday was a beautiful day. My weather station told us the temperature hit the 60 degree mark and we had only a light breeze. Both dogs spent a lot of time outside. So did the three of us, but I was wrapped up in some chores, like changing oil in our outdoor working machines.

GD and I made a trip to the local Ace Hardware Store for some fertilizer and that got spread after the tractor had been returned to its roots as a lawn mower. It had spent the winter as a snow blower. Our daughter took Gator Golden home with her so the lawn would have 24 hours for the fertilizer to set in. The pup was returned late yesterday. Naturally, we had to provide an evening meal for GD.

But, I did get two pictures this weekend. FF discovered this little surprise across the street from his Florida home. With his permission, I’ve adopted the picture. There’s a little version of it in the upper right corner here, and below is a larger one you can easily see: 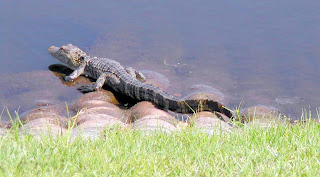 It won’t be long before FF and Mrs. FF are heading back to their home here in Maine. I hope he sees “Albert” again before he leaves Florida and gets a shot from the front. I simply have to point out this one isn’t the real “Albert.” Albert is the mascot of the University of Florida Gators.

Yesterday was a holiday, Patriots’ Day, in Maine. Massachusetts is the only other state to celebrate the beginning of the fighting in the American Revolution. State offices, schools, and some public service businesses were closed. Many stores were not. Also federal offices were open.

Because the state offices were closed, not much happened that would prompt any comment or criticism from me. Congress just returned to session so I don’t have anything to say on its mischief. The picture I got from FF Sunday was a good thing for more than just giving me at long last a gator picture for the blog; it also gave me something to have a Tuesday session here.
He also gave me another one so I’d have a choice:

A good guy, that FF.

Shortly before suppertime last night, Gator Daughter brought our Golden home. Her Golden came along for the ride. They greeted us at the front door. 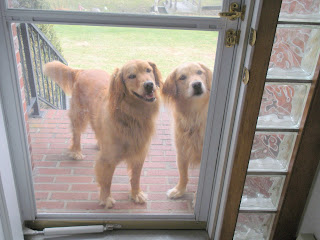 That’s Gator Golden on the left and her sister beside her asking to come into the house to greet their people waiting inside.